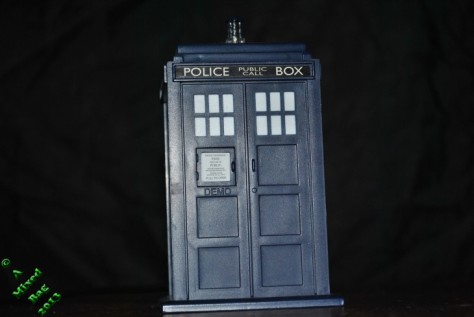 “He needs to grow up,” Jason’s step-father said, finishing off his eggs.

“And he keeps carrying that stupid toy around, Amanda,” William said.

“His father gave it to him,” Amanda said.

“Still, sooner or later he needs to man-up.”  William said.  He stood, draped his suit jacket over his arm and picked up his briefcase.  “Shareholder briefing today, don’t wait dinner for me.”

Jason heard the front-door close behind William.  Neither of them had seen him.  He was getting good at not being seen.

He went upstairs.  September sunshine shone in his room—school would start soon.  He lay down on his bed.

He opened his hand and stared at the little blue TARDIS in his palm.  He remembered—a crisply cold winter’s night, the Milky Way an arch of diamonds stretching across the sky above them.

“There, son, there’s Pleiades, and next to it is Taurus the Bull—see the two horns?—and there, see those three stars in a row?  That’s the belt of Orion the Hunter.  Find Orion’s belt and you can find your way around the whole sky.”

Jason closed his hand on the TARDIS.